Did something other than sight-see in Denmark

I was lucky to spend today attending a workshop on “Health, Work and the Workplace” at the Aarhus School of Business (academic economists use an odd definition of "lucky").

Besides the opportunity to interact with lots of researchers with similar interests, there was an opportunity to hear about some fantastic data that are available to Danish researchers. In particular, social scientists are Aarhus University have access to survey data sets with personal identifiers that can be linked to social registry data on jobs, social insurance, and even health care utilization.

The conference featured several studies that linked survey data on perceptions of work conditions, such as exposure to physical and health hazards, workplace policies, work schedules, job satisfaction, supervisor practices, and the like, with more objective information on earnings and job turnover as well as long-term information on these outcomes. Several papers showed how bad work conditions and practices were associated with worse health outcomes for employees. Another paper showed how some of those policies hurt companies by increasing turnover. Although the emphasis was on how health worked through and was affected by these workplace conditions, it’s easy to imagine lots of additional research that could be done.

All of the research focused on outcomes in developed economies in Europe and the U.S. These countries all feature relatively strong protections for workers’ health. In the case of the European countries, workers also had fairly uniform access to quality health care. Despite these protections and supports, there was still consistent evidence throughout many of the papers that certain types of working conditions, such as holding a job with high physical demands, being exposed to job insecurity, and even having to work for a “toxic” boss, takes its toll on people’s physical and psychological health.

At this point, the research seems best poised to help us refine our understanding of how health and work outcomes are determined, borrowing insights from two related fields. It is also likely to help us understand the possible consequences of work intensification at jobs as employers downsize, “rightsize,” and shift more risks to workers. These policies may have immediate benefits for employers’ bottom lines, but the research at the conference suggests that they may be costly in the long run. Worse, these costs may be external to firms and may appear years after firms take certain actions, giving the firms few incentives to mitigate them.

We already know that economic outcomes for many workers have deteriorated over the last decade and especially through the Great Recession. Regrettably, the results from the workshop suggest an additional mechanism by which workers may have been made worse off by employer restructuring.
at 5:51 PM

Email ThisBlogThis!Share to TwitterShare to FacebookShare to Pinterest
Labels: Academia, what ails us

Fate (and an invitation to talk about some research on the health of workers in different occupations) has brought me to Denmark, a verdant land of wind turbines, excellent rail service, universal health care, tradable carbon permits, labor protections, restricted store hours, and one of the highest tax burdens on the planet -- in other words the nightmare vision of the Republicans/Tea Party.

A job-killing, death-panel-induced, government-hands-all-over-my-Medicare, theft-posing-as-taxation calamity may yet befall the Danish economy. For now, however, there's little that's rotten here. Despite the recent global recession, the country remains prosperous with an unemployment rate of 5.9 percent and a per-capita gross national income that is only slightly less than that of the US on a PPI-adjusted basis (and 25% higher than that of the US on an exchange-rate basis).

Aside from a couple of cranky infants in a coffee shop, the Danes that I have encountered have been happy and smiling. Maybe they're just getting the last laugh.
at 4:07 AM

Email ThisBlogThis!Share to TwitterShare to FacebookShare to Pinterest
Labels: other places, Party of No, Tea Party

Given the enormous shortfall in North Carolina's state and local government budgets, some very tough decisions need to be made. Republicans in the General Assembly are arguing that one of these decisions may involve the availability of early voting.

The Charlotte Observer reports about a contentious vote in the General Assembly to reduce early voting.

On a largely party line vote Thursday, the N.C. House tentatively passed a bill that would cut North Carolina's early voting period almost in half.

Republican supporters said cutting the 2 1/2-week period by a week would save money for local governments and for candidates.

Critics said it would reduce turnout, particularly among African-Americans.

"Whether intentional or not, the effect of this measure will be disenfranchisement," state Rep. Kelly Alexander, a Charlotte Democrat, said during the debate. "It will suppress the vote."

Calling this disenfranchisement is far too strong. However, the shorter voting period will almost certainly reduce turnout and have the largest effect on poor, and especially working poor, households.

The expected reduction in voting follows from a simple economic model of the "demand" for voting. In the economic model, people value voting but also value all the other goods that they can possibly consume. People face trade-offs between voting and the consumption of other goods, as the time and effort required to vote reduces the resources available for other things. Thus, voting has a cost, or price. The predictions from the model are the same as those from a standard demand equation. Increases in the price of the good (voting) and decreases in people's resources cause the demand for the good (voting) to fall.

A shorter early voting period makes voting less convenient, effectively raising the price of this good. Lower incomes mean that poor people would already be close to the margin of not voting, so the change in availability/price would be expected to affect them more. Inflexible work schedules and limited transportation options might also mean that the poor would also face higher initial costs voting, again putting them closer to the margin of not voting.

We do know, however, that the costs of offering early voting are extraordinarily low.

In 2010, North Carolina's 100 counties operated 297 one-stop early voting sites, with every county operating at least one site but with many operating multiple sites. Not every site operated through the entire early voting period. Counties tended to operate more sites closer to the election.

A review of the schedules shows that counties offered a total of 1,104 "site days" during the first week of voting in 2010. The NCGA Fiscal Research Division (FRD) estimates that each site cost $389 per day to operate. Using this figure, the average county spent just $4,295 (or $429,500 across the entire state) to accommodate the first week of early voting. Divided among the state's 9.6 million residents, the cost of operating the sites was less than a nickel per person--literally pennies.

It should be further noted that the counties themselves didn't bear all of this cost. Local boards of election can obtain reimbursement from the federal government for the costs of operating these sites. The FRD reports that 59 counties had their costs reimbursed.

Voting is a fundamental right. While it's hard to place an exact value on how much early voting contributes toward extending this right, it seems that it would be worth at least a nickel.
at 12:34 PM

Email ThisBlogThis!Share to TwitterShare to FacebookShare to Pinterest
Labels: athwart democracy, NC follies, Party of No

North Carolinians old enough to remember the National Lampoon and its iconic 1973 "if you don't buy this magazine; we'll kill this dog" cover are getting a chance to watch a real-life replay, involving Republicans holding long-term jobless benefits hostage to unrelated budget demands. 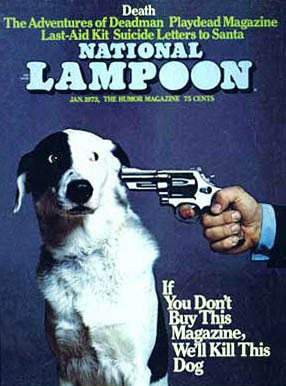 Perdue vetoed the GOP proposal to extend the benefits only if the governor accepts double-digit cuts before budget negotiations begin in earnest. Perdue called the linkage "extortion." Republican leaders said they wanted to ease questions about continued state funding in case a budget deal isn't reached by the time the next fiscal year starts in July.

..."What I am telling people is the Senate and the House have passed a bill that extends those benefits. We think the question is: what has the governor done other than say, 'Do it my way. That's the only way that I'll accept.'" Berger said. "I would hope that either the governor would modify her position or tell us what it would take to modify her position."

In other words, "Governor, if the budget isn't an acceptable ransom for jobless benefits, what is?"

The appropriate response is "nothing."

The extension of unemployment benefits has nothing whatsoever to do with North Carolina's budget situation. Extended benefits require a minor legislative fix so that federal dollars--approximately $11 million per week--can be spent to help 37,000 long-term unemployed.

Email ThisBlogThis!Share to TwitterShare to FacebookShare to Pinterest
Labels: NC follies, Party of No, stimulating discussion

Republicans in the NC General Assembly still have not gotten around to passing legislation necessary for 37,000 long-term out-of-work North Carolinians to collect an extra 20 weeks of federally-funded unemployment benefits.

Last month, the Republicans tried to use the extension to extort Governor Perdue into committing to double-digit percentage budget cuts for the coming fiscal year. The governor, rightly, vetoed the legislation and asked for a clean bill. The extension has subsequently languished.

Regrettably, Republicans' general callousness towards the poor isn't new or surprising. However, once upon a time, Republicans did at least try to show support for workers who lost their jobs, a group they included among "deserving poor." No more.

As the Republican Senate Leader, Phil Berger said, "We need to remember that we're talking about the extension for folks who have already received benefits" for a year and a half.

Moral and humanitarian concerns notwithstanding, Republicans should be able to grasp the practical, economic benefits of hundreds of thousands of federal dollars flowing into a state that still suffers from 9.7 percent unemployment. But again, no.

Since benefits ran out, Republicans have found the time to adopt resolutions recognizing the 100th anniversary of North Carolina Family and Consumer Sciences, a former representative, and Cinco de Mayo.

These are priorities, but legislation that would help the long-term jobless and bolster our economy, all without costing our state budget a dime is not.
at 10:33 AM