Why do some people insist on describing the Sen. Al Franken's alledged sexual misconduct as "petty" or minor?

The latest example is Michelle Cottle's article, "What Does 'Sexual Misconduct' Mean?," in The Atlantic.


...as the public outrage over sexual misconduct gains force, it is swallowing up an increasingly diverse range of allegations, from the relatively petty (such as those lodged against Franken) to the truly monstrous (such as the claims regarding Harvey Weinstein and Roger Ailes).

To be clear, Cottle roundly criticizes Sen. Franken's behavior. She also correctly points out that his behavior wasn't as horrendous as some other recent cases.

The picture he gleefully staged during a 2006 USO tour prior to running for the Senate is both horrible and demeaning. Worse, it was on a CD of photos that were distributed to multiple people, so the victim's shame was compounded. 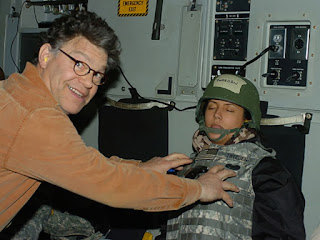 
There's no excuse. I look at it now and I feel disgusted with myself. It isn't funny. It's completely inappropriate. It's obvious how Leeann would feel violated by that picture.

Inappropriate, disgusting, a violation, but definitely not petty. And that's the offender's take.

Would other accusers have come forward if Sen. Franken hadn't announced his resignation? Who knows. But aren't eight accusations of sexual assault--a serial pattern of misbehavior--enough?

Sen. Franken's behavior is disappointing on many levels, not least of all because he was an effective advocate for women's issues. He has taken some important remedial steps by apologizing (sort of) and announcing his resignation.

However, his behavior by any objective standard was beyond the pale. It was not a petty offense; it wasn't flirty unwanted attention; it wasn't even close to the line.

It's regrettable that President Trump and others seem to have gotten away with worse behavior--for now. But none of that changes the objective awfulness of Sen. Franken's behavior.
at 2:04 PM

On Friday Donald Trump denied that he was even aware of intelligence evidence proving that his disgraced national security adviser and Russian toadie, Michael Flynn, discussed sanctions with the Russian ambassador--"I don't know about that. I haven't seen it. What report is that? I haven't seen that. I'll look into that."

Today he wants us to believe that he has been on top of the situation for weeks, determined that the discussions were legal, but pushed him out this week because of a lack of trust.

Wouldn't the lack of trust be a firing offense when it was discovered, not weeks later? If Trump was aware of the nature of Flynn's discussion weeks ago, doesn't this mean that he and his administration have covered it up in the meantime?

Nothing that Trump says is believable. Watch for the fake explanations to change in the coming days.
at 5:01 PM

Email ThisBlogThis!Share to TwitterShare to FacebookShare to Pinterest
Labels: Trumpocalypse

The rantings of this so-called president

A so-called president who fell three million votes short in the popular vote, whose election was tainted by Russian meddling and possible Russian collusion, and who is daily violating Constitutional prohibition against foreign payments questions the legitimacy of a federal judge.

Email ThisBlogThis!Share to TwitterShare to FacebookShare to Pinterest
Labels: Trumpocalypse

An ill-considered stroke of Donald Trump's pen on Monday removed the U.S. from the Trans Pacific Partnership (TPP) and in the process dampened prospects for jobs and growth in Greensboro but brightened the prospects for Chinese hegemony in the Pacific.

The TPP, which included 11 other countries but excluded China, would have eliminated those countries' tariffs on all U.S. manufactured goods and farm exports and greatly lowered tariffs on other goods. By doing so, it would have increased trade between countries that account for 40 percent of the world's output AND given the U.S. a trade advantage over China within that huge block.

The TPP would have also strengthened intellectual property protections to allow the U.S. to better benefit from its thought capital and would have bolstered environmental regulations, labor standards, and human rights in the partner countries in ways that would have leveled the playing field for U.S.

A substantial portion of Greensboro's economy, including emerging high-tech manufacturers like HondaJet and RFMD, involves exports. Figures from the International Trade Administration show that the Greensboro-High Point metropolitan area exported $3.3 billion worth of goods in 2015 (the latest year for which figures are available) of which $1.6 billion went to TPP countries. Other important Greensboro employers, including FedEx and UPS, provide services that support this trade. Good-paying jobs at all of these companies are put at risk by the withdrawal from the TPP, and Greensboro is hurt.

At the same time, China benefits. Without the TPP, China's exports to the other partner countries will remain relatively competitive. With Trump making the U.S. unreliable and unsteady, the other countries have an incentive to look elsewhere. And to the extent that Trump's action and other "America First" rhetoric signal a withdrawal from the Pacific, our partners have less support to stand up to China. China couldn't be happier about this.

It really makes you wonder who Donald Trump is working for.
at 5:12 PM

Senseless gun tragedy in Goldsboro, as a quick-draw homeowner stands his ground and kills his wife.


A Goldsboro man accidentally shot and killed his wife early Friday morning when he mistook her for someone trying to break into the home.

...Billy Williams then got a gun from a safe, opened the front door and fired one shot, authorities said. The front porch light was not on.

There are so many other things the homeowner could have done...call the police, turn on the outside lights, yell out that he was about to shoot. Instead, he fired blindly into the dark.