In response to questions posted to Jihadist web-sites, Al Qaeda's second-in-command, Ayman al-Zawahiri, ducked out of his cave long enough to assert that "We haven't killed the innocents."

Most of al-Zawahiri's rantings are best ignored. However, his lie that innocents haven't been deliberately murdered must not stand unchallenged.

Please let me tell you about four innocents that should be with us today. 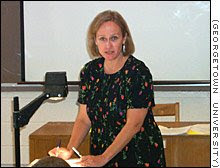 Professor Leslie Whittington was a colleague from Georgetown University, when I was teaching at George Washington. She, several colleagues and I organized a monthly workshop on population and family economics that rotated around different univerities, institutes, and agencies in Washington.

Leslie was an accomplished and productive researcher, but she accepted the demanding (and largely thankless) administrative task of an associate deanship at Georgetown. After several years in the associate dean's position, an upcoming sabbatical was going to allow her to return to her research. 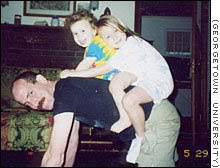 One of the immense joys of academic life is the occasional opportunity to travel to fantastic places to conduct research. Leslie had found such an opportunity at the Australian National University in Canberra. She and her husband, Charles Faulkenberg, had arranged for them and their two young daughters, Zoe and Dana, to spend the sabbatical there.

That opportunity put the family on American Airlines flight 77, which was to take them from Dulles to LAX on the first leg of their trip. They perished when al Qaeda's murderers plunged their flight into the Pentagon.

America is divided about many things, but we should never forget that the struggle against al Qaeda is a fight to eradicate the world of a horrific evil that does indeed slaughter innocents, exults in that slaughter, and promises more.
at 9:30 AM