The Global War on Common Sense

Right wing political correctness. Ignorance. How about a little of both with your morning coffee. 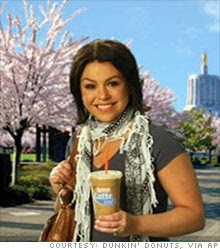 Dunkin' Donuts announced this morning that it was pulling an ad that featured Rachel Ray holding a cup of its iced coffee while wearing a fringed scarf.

Why pull the ad? Well, Michelle Malkin and other conservatives complained that the scarf in question was a keffiyeh, a traditional arabic headdress, and that it "symbolize(d) murderous Palestinian jihad."

Of course, this is the same Michelle Malkin that thinks that internment was and is a good idea, so her cultural observations must be spot on.

It turns out that Ray's scarf was, well, just a scarf with paisleys no less. But no matter, Dunkin' Donuts yanked the ad anyway.

You be the judge. Was Ray hawking coffee or global jihad?
at 6:08 PM