What's good for T. Boone Pickens, Jr. might be good for us

As you've probably already seen on TV, oilman and energy developer, T. Boone Pickens, Jr., has been hawking a prescription for increased energy independence that he modestly calls, The Pickens Plan. 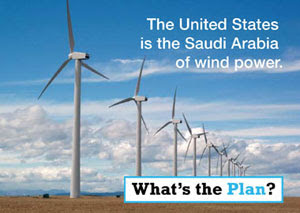 Pickens is an unabashed conservative and active in Republican politics. He not only supported George W. Bush in the last two elections but also helped to fund the despicable Swift Boat smear campaign against John Kerry. So, he's not exactly a darling of progressives.

What then is he advocating? Pickens calls for developing wind turbines for electricity across the middle of the country from the Dakotas to Texas and developing the transmission infrastructure necessary to send that electricity to the rest of the country. He estimates the cost at $1.2 trillion--an enormous investment but one that compares favorably to what we currently spend on energy.

Pickens further advocates using the new generation capacity from the wind turbines to replace power plants that run on natural gas and reallocating the natural gas freed up from power generation to natural gas vehicles. He estimates that these measures could reduce U.S. imports of oil by a third.

What's his motivation? Pickens has invested in the development and supply of natural gas for at least a decade. He would have a clear commercial interest in expanding this market. More recently, he has also invested in giant wind farms. As such, he also has an interest in subsidies and reduced regulatory bottlenecks to support transmission lines for those farms.

Crony capitalism notwithstanding, Pickens' plan dovetails with U.S. needs. He is putting his own money into the wind generators and would be providing clean energy. The U.S. already needs to invest in its electrical transmission infrastructure. His plan would mostly benefit the environment and help reduce our dependence on oil.

The specifics of his plan need to be examined carefully. However, it could end up being a wind-wind solution to our energy problems.
at 3:30 PM