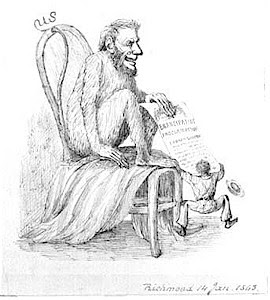 I guess that I should be outraged by Wednesday's offensive editorial cartoon in the New York Post, depicting two policemen standing over the body of a chimp that they had just gunned down and saying, "They'll have to find someone else to write the next stimulus bill."

But I used up my outrage at President Bush being labeled as a "smirking chimp," President Clinton's voice being given to an animated gorilla, and this little gem to the right.
at 6:35 PM