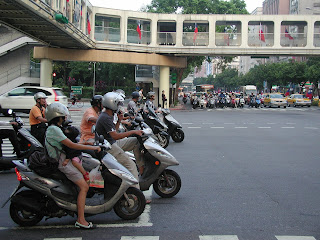 It's now on to Taipei (which in Chinese translates roughly into "asthma").

Taipei is bordered by mountains that rise more than 3,000 feet and features one of the world's tallest buildings, Taipei 101. A visitor would be excused though for not knowing this because these landmarks are obscured by the smog.

As you can see on the right, there are also more than a few motorbikes. The picture was taken while the bikes were staging at a traffic light. In the foreground, you may be able to see the toddler strapped to the rider's chest. Slightly older children rode in parents' laps. A few of the children actually had helmets.

If I wasn't coughing so hard, I might have said something.
at 5:34 AM