I do not propose to write an ode to dejection, but to brag as lustily as chanticleer in the morning, standing on his roost, if only to wake my neighbors up -- and all the better if it be a chanticleer casserole. (with apologies to H. D. Thoreau) 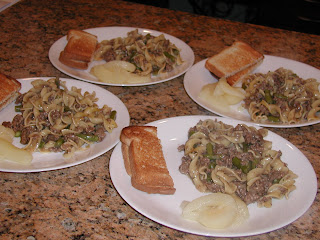 Tonight's dinner is shown in all its glory on the left: saucy beef pasta (USDA guide, p. 24), canned pears, and white bread toast.

Fixing time was the shortest so far, a total of 30 minutes. For all intents and purposes, the meal is homemade Hamburger Helper ® ("beef pasta" flavor), with frozen green beans thrown in.

I liked it and would fix it again; the other three Ribars were neutral. Just so you know, I like Helper, too, and I think I like ®.

One warning for those of you who try this at home, the recipe calls for 6 3/4 cups of egg noodles, or about an entire one pound bag; half a bag was more than enough. Also, the recipe calls for cooking the green beans before putting everything in the oven; I'd recommend just putting them in frozen and letting the oven do the work (they'll come out a little crunchier and a deeper green). Better yet, use frozen peas.
at 8:02 PM