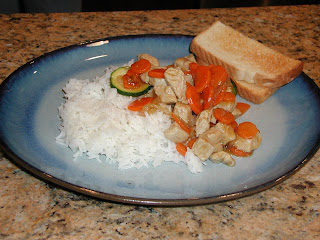 Tonight's dinner, shown on the right, was turkey stir fry (USDA guide, p. 40), white rice, and the ubiquitous white bread. The stir fry, with carrots, onions, and zucchini, had more vegetables than the last two dinners combined. It also used fresh vegetables, which was also a nice change from the last two dinners.

Dessert (not shown) was a peach-apple crisp (USDA guide, p. 65). The crisp was good, but not especially crispy. The crumb mixture didn't completely cook--the recipe calls for 20 minutes of baking but most crisps call for 40-50 minutes (we actually left it in the oven for 40 minutes). Also, most crisp recipes have you put something crunchier in the topping like oats or nuts. That said, the kids devoured it. Normally, that would rate as a success, but as it turns out, the crisp was supposed to last for two meals.

The prep time and cooking time for this meal were longer than the guide suggested. The cooking was also substantially more involved. There wasn't anything that really went beyond what we would normally prepare. But with a lot of chopping and with three hot dishes going at once, it might be more than a parent with active little kids might want to take on.
at 7:54 PM